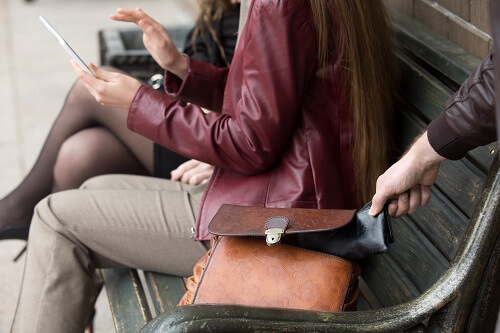 Theft crimes can take many forms. Any action calculated to deprive another of their rightful ownership or exclusive control of monies, items or other entities can constitute theft. Depending on the specific crime and the particulars surrounding its execution, a theft crime may result in misdemeanor or felony charges. In either case, a theft crimes attorney can do much to attempt the best outcome possible if you have been accused of such a crime.

Theft crimes may include, amongst others, the following:

Burglary
In the state of California, burglary is also referred to as "breaking and entering" and refers to entering a building with the purpose of committing a felony, such as robbery. In some cases, burglary does not even need to consist of breaking and entering and can occur should a person remain in a building or dwelling after their invitation has been withdrawn. This is a three strikes offense.

Carjacking
The crime of carjacking involves the violent taking of a vehicle. By using force or the fear of force to take a motor vehicle, the defendant will often be facing felony charges. This is different from other theft crimes involving cars, such as grand theft auto, as it is taking the vehicle from someone's possession directly. Taking a car from someone's driveway would not be carjacking.

Grand Theft
The term of grand theft is a classification of theft which covers all types of thefts where the item stolen is of high value. This can be done violently, as through robbery, or may even be committed as a white collar crime behind the scene for years – such as fraud, embezzlement, identity theft or any other form of non-violent theft. Regardless, the defining factor of grand theft is the high value stolen.

Petty Theft
Similar to grand theft, the term petty theft is an umbrella term that covers a wide variety of theft crimes where the item taken is minor. This is typically charged with such crimes a shoplifting and is normally a misdemeanor. For example, someone grabbing a t-shirt in a retail store would be a crime of petty theft, whereas someone taking a diamond necklace would likely be grand theft.

Larceny
The criminal offense of larceny refers to the taking of property that belongs to another. This is defined under California Penal Code §484 (2010) and can refer to several different forms of theft. This could be anything from shoplifting to grand theft auto with penalties that will vary depending on the circumstances of the actual arrest. The higher the value of the stolen goods, the more severe the penalties.

Robbery
One of the most common forms of theft crimes is that of robbery. This includes the theft of a possession that belongs to another person from either their direct person or from their immediate possession. To be classified as robbery, this action must have been committed through either force or the threat of force and the causing of fear. This is considered to be a felony offense.

Shoplifting
Another common form of theft is known as shoplifting. This is the taking of good from a retail store either by not paying, refunding something that was not legally purchased, using knowing invalid forms of payment to purchase items or altering the price tags to pay less than the product is valued at. This is commonly tried as a juvenile crime and is usually a misdemeanor, but depending on the value of the product could be a felony.

Experience in All Types of Theft Cases

At Martinian & Associates, we have experience with all types of theft cases. The familiarity this brings is invaluable in strategically handling your defense. We know which specifics of the case should be looked into and how and where evidence may be found. Additionally, we can review the prosecution's evidence and sometimes find factors which invalidate its admissibility.

All of our actions are aligned toward gathering information which may be used in the attempt to achieve the best results possible. As needed, we can also pursue a reduction of charges and even negotiate in an attempt to achieve lesser penalties. Along with our great familiarity, we recognize that each case is individual and will approach yours with a fresh view of what can be done in your defense.